Presently, a woman ordered a pair of jeans for herself online and what she received in return is astonishing. The woman got a bag of onions instead of a pair of branded jeans. Though, it was some random website that sells used stuff which is hell-expensive in reality, online at a discounted rate.

Today’s generation loves to shop online, and even due to Covid-19, the trend of online shopping has become high. Thus, the reason was that most of the businesses went online, and many small businesses arose. Those small businesses didn’t have to establish physical shops and generated a handsome income.

Whereas, when multiple people shop online, we all hear the stories of some of them about how shopping for items was a disappointment. According to those people, they ordered expensive items and got bricks, soap bars, or other crazy things like these in return.

When surfing social media applications like Instagram and Facebook, businesses have their own website and sell branded stuff. According to the reports of The Mirror, the woman ordered a pair of used Levi’s jeans. Also, she paid for it from a vendor on Depop. 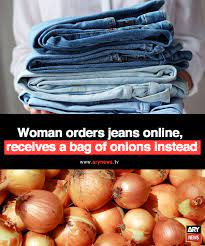 Hence, she was looking forward to receiving a pair of branded jeans at her doorstep. However, the woman got a package containing tiny onions and was thinking about how it was possible. At the same time, the seller declares that he sent the same item, which was on their website, and doesn’t have a hint of what happened.

Afterward, when the woman received the bag of onions instead of a pair of branded jeans, she texted the independent seller. Before filing a formal complaint, she wanted to confirm whether it was a mistake or a kind of joke.

In response to the buyer’s text, the seller responded, “Sorry, I have no idea; I sent Levi’s jeans. He asked; that didn’t it look open to you? The buyer uploaded a picture of the package, a box of onions.

Another similar incident is of a Bihar man who reports receiving a kg of potatoes after ordering a drone camera from an online store. Moreover, the buyer made a video and uploaded it online, which also became famous.

In the video, the delivery agent requested the man to open the package and later accepted that the retailer had committed fraud.

France has recalled its ambassadors from the United States and Australia

China offered to help the Taliban build and develop Afghanistan

Big offer from the Taliban to the United States

U.S. Message of congratulations on election of Prime Minister of Pakistan We thank the United States for the message of

Shrines will be fully opened in eight cities, Asad Omar